Back to the news

- We are living in a complicated period, events were on the front line. All shows and events are canceled over several months. How do you live this situation? Is motivation still present?

Indeed it is not a very simple period. I live it rather well with regard to my private life, however professionally it is very difficult not to be able to take out your bicycle to move on grounds, to have fun and to train between friends., Of course that the motivation remains present , it even increases! Take a footballer off his ball, the first thing he will do when he can is without kicking a ball. For me it is the same ! It will be the first thing I do when it's all over, get my bike out and have a blast !!

- It is imperative for professional athletes to maintain physical fitness and a minimum of feeling on the bike. What are you doing right now to limit the damage?

Unfortunately maintaining my feeling is not easy ... no spot, no space ... suddenly the bike is tidy in the garage. RIP.

As far as form is concerned, I do cross fit every day. It’s a really good way for me to get some fresh air while keeping a minimum of physical condition. I vary between pure cardio or more weight training.

- The 2019 season was relatively rich in emotions and events. What's your best memory ? On the bike? With the team?

Oh yeah ! It is not easy to make a choice! I have a little preference for everything we did at "Arabs got Talent" in Lebanon!

The live TV experience is crazy, the pressure of the direct, creating millimeter shows with 8 people in record time, meetings ...

Regarding performance, with Maxime Peythieu we were on dirt mountain bikes. Performing figures as engaging as if we were in a normal configuration in a small, poorly lit environment, only in strategic places (kicker / reception), in my eyes, it was a real challenge.

Then ... one can't go without the other! A show like that doesn't go well without a top team! A laugh even in stressful moments, at the end of the day, at the restaurant! So I also place it on top of my memories with this bunch of crazy people !!!

- We could see an absolutely magnificent Best of pass by the end of the year. It is undeniable that in your performance, in addition to performance, you emerge something special. The public loves you, waits for you from year to year. How do you explain this success?

I don't think we can find a real explanation. It's a whole. I just know that we always do this with passion! We want to transmit and it shows on our faces, our body language and I hope that people feel it like that. We have always been close to the spectators, we talk.

It's our state of mind.

- You have been working with X-sports shows for many years now, you have performed hundreds of shows in many countries, for sporting events, TV shows and many more. What would you like to live today? (in terms of show of course)

It's a not so obvious question .. we have already done so much ... But if I think about it ... A show calibrated to the millimeter, which will take the form of a tour throughout France and why not in the world? During a whole year with a united team! I think that's what I would like to experience!

TANGUY on The Roc d'Azur 2019 edition 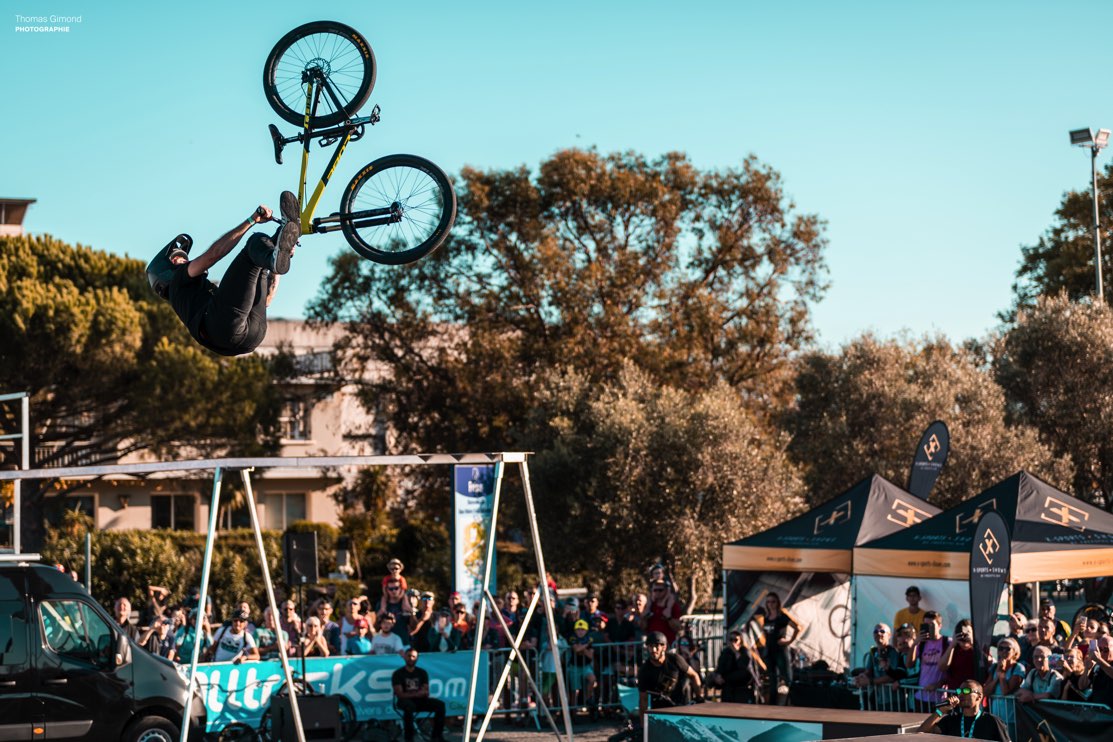 - Tell us about your partners and your projects alongside X-sports shows?

I recently returned to the saint of the mountain bike team "Cube". (to view Tanguy's profile click here) They help me with the bikes and it already allows you to breathe in gear. It is a brand that has managed to make a name for itself with very good material at an affordable price, and which in my opinion comes today to compete with the big brands!

I have a lot of projects! Lots of pictures! However given the period it is not easy to create content ... so look forward to it all ending! Then of course, X-sports shows with which I work for a lot of years! Hope it lasts ! Projects with X-sports will also follow.

- During your training today, what is your state of mind? Do you put pressure on yourself while keeping the urge to progress or are you more in a maintenance state of mind so as not to seek the injury?

I went through a lot of phases. There was a time when I started at X-sports shows, the urge to do too much well did me harm. I started out in a state of mind to ride to train and learn new figures imperatively. Which demotivated me a little and made me lose the true value of this sport! So either I think it is a method which corresponds to certain people but I realized that it was really not good for me.

I will ride, (since very recently) with the certainty that what I need is a good session with friends without putting pressure and the rest will inevitably follow! So ended the headache! Especially since injury level I have given enough in the past ahah! Surely the reason why I always have this thought in the back of my mind ... No more injury !! ahah

- In 2019 we could observe a real evolution of your approach on shows. The performance is there, but in addition we can see really crazy synchronizations between the pilots and a real game that helps to increase the intensity and the level. On the Roc d'Azur in October it was really crazy (video). How do you work on these new sequences with your partners?

You will take me for a fool, but most of the synchronizations that we carry out to date in show, were born from a simple desire to try something new! For example the backflip above Maxime Peythieu which goes into manual below, came out like that of an idea during a show!

We often go over it on shows. Then one day we said "hold on! .. What if you went under while driving?" Now the same but in manual! "And if I tried the same but with a figure!? And voila .. everything is built little by little. We have known each other for a long time now and we know what the other is capable of, which allows us to have a blind trust in the other.

I can also tell you about the one where I am lying under the wheels of Maxime while he is wearing a mini backflip! She's fast! "Go ahead Max puts the bag on the funbox and see if you can tackle it without crushing it!" Obviously Max tries that early. Knowing Max, we suspected that he would succeed on his first try. A world first is being played. So good ... seeing the ease and precision of the rider, neither one nor two I propose to put me in place of the bag ... The rest you know, obviously it succeeds ahah !! Waterfall which was filmed and shared by international pages like "Peopleareawesome". This clip has made millions of views worldwide. Video here

- Thank you for taking the time to answer these questions, the last word, a message to send?

Do not take your head too much! Do what you love and enjoy. Live with passion! 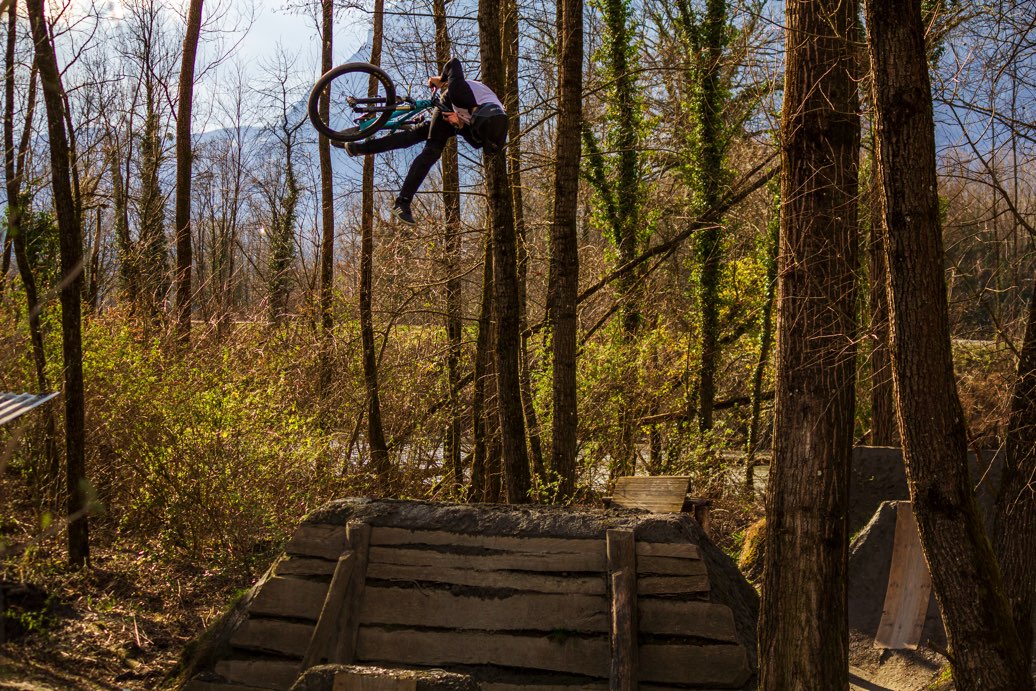 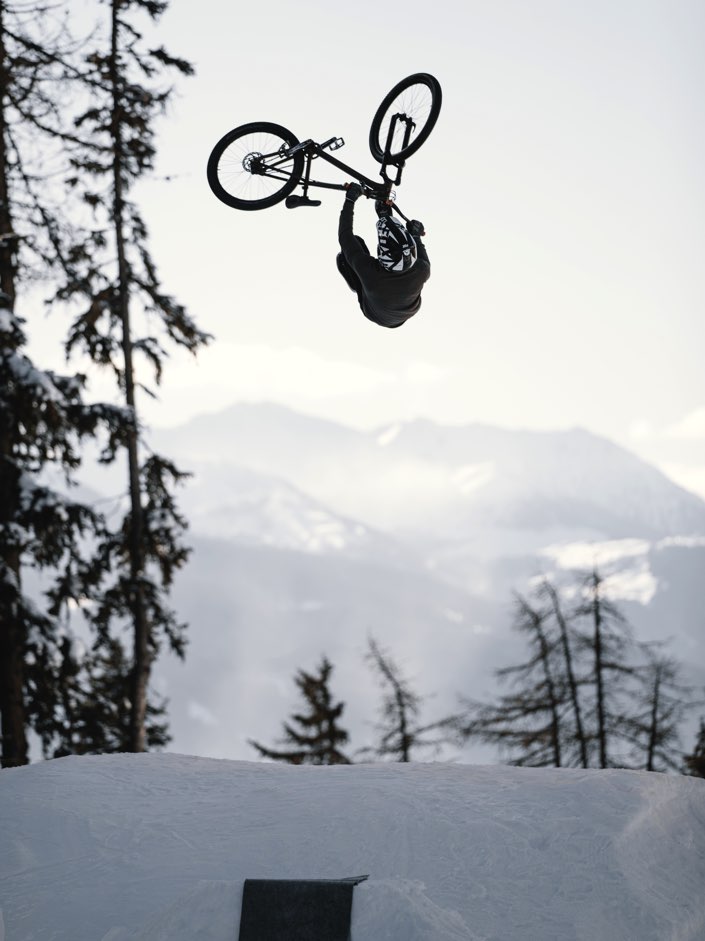